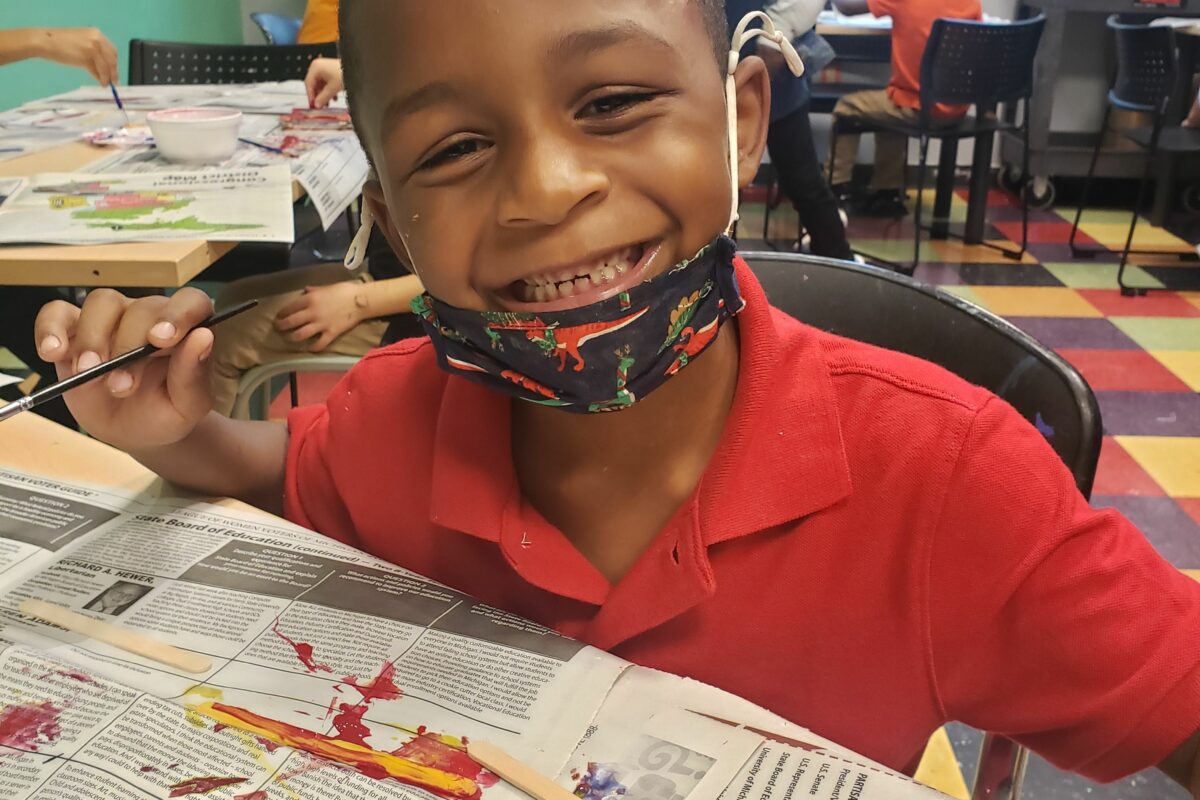 Art: Creative Expression at the Club

Fostering creativity and self-expression through art is a focus at all three of our Grand Rapids Clubs. This is accomplished indirectly, with coloring supplies being readily available in each room of the clubs. But it is also accomplished with great intentionality, with staff directing art projects every evening. Students are also encouraged to dream up their own creations and are given access to the materials they need to create those masterpieces.

Darren, an 8-year-old at Paul I., drew a self-portrait and shared that was his favorite thing to draw – but sometimes he really likes to draw his family, too. When he finished his colored pencil self-portrait, he asked for cardboard so he could create his own mask.

Leah, a 5th grader, found items around the room to trace in order to create her picture just as she envisioned it. She traced around a paint bottle to create a perfectly round head, a glue stick for the outer edge of the eyes, and a marker cap for the inner portion of the eyes. After she had completed the outline of her sketched figure, she asked for scrap paper so she could test the skin tone markers and find the best shades for skin, hair, and even blush.

An 8th-grader at Steil spent the entire evening at a table in the games room working on different drawings. Sometimes friends crowded around her table, and sometimes she worked quietly on her own. She shared that, for her, the hardest part of art was coming up with the idea of what to sketch and finding the time to finish the drawings she started. She admitted with a smile that she often worked on her drawings during school, too.

At Seidman, the planned project went slightly awry for a short time. Hot glue guns were needed to affix popsicle sticks into the shape of the students’ first initials, but the glue sticks were nowhere to be found. Dymond, our 2021 Youth of the Year, assisted as staff scrambled to find a solution. Ms. Aliyah came to the rescue with a gigantic box of glue gun sticks that had been moved to the office, and the art project commenced!

As a mom of young kids, I admit that art has not always been encouraged in my own home. What I know will be the resulting mess can sometimes be just too daunting! Yet at Boys and Girls Club, I’ve seen that mess embraced and celebrated. When Chloe, a member at Paul I., wanted to practice a paint-splattering technique, Ms. Sarah simply handed her a paint shirt and moved a child from Chloe’s table to another to reduce any collateral damage.

It turns out that it’s amid that mess that beauty can be created and flourish. In the words of composer Stephen Sondheim, “Art, in itself, is an attempt to bring order out of chaos.” What a beautiful lesson for our Club members to learn firsthand!